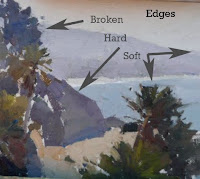 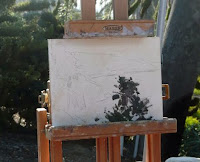 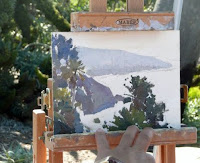 Besides hammering down "form, color, value and edges" today Calvin had an inspired moment. Pointing to the tip of his brush he said all four elements are contained in every brush stroke. Aha! So every brushstroke counts. I also realized today that what he means by "detail" is not what us westerners would consider as such per se, that is busy work, branches an pebbles. Rather, it is the just as precise and just as deliberate blending and enhancing of the initial masses. 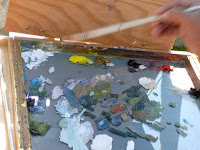 Different today was the palette as well. Just because he demonstrated how he keeps three premixed piles of color, one cool, one warm (made of whatever is left he said) and a neutral grey one. Calvin winces when I say my colors are dirty. He believes it's all in the greys anyway. He also demonstrated the use of black ....in the sky nonetheless.

The use of covering a canvas quickly has become very apparent to me as light kept changing and shadows moving in the cliffs. I post here a bit of my evolution throughout the workshop in the shape of my three pieces. The first one looks quite tentative and confused, the second one of Crystal Cove looks a bit dirty but the basic methods are there, specially in my "Calvin cloud" in the upper corner right ha ha. My third piece -and may be- my most accomplished at this stage- took a lot less time and paint because I finally slowed down enough to become quicker, that is, less mistakes make a faster painting. Even Calvin liked it. He had some awesome suggestions I'll keep to myself.

I really focused on the "form" part today . And it made quite a difference When you think "form", and design, things start to slow down. You want to create forms in the most organic way possible, no parallel strokes or repetitive moves. 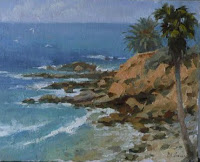 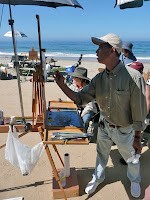 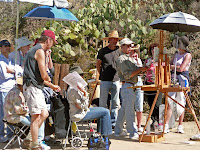 Day 2 of Calvin Liang's workshop took place in Crystal Cove State Park. Calvin set up for a morning view of the cliffs below: 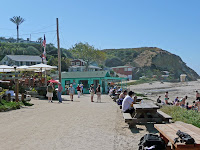 Calvin used his "cover the canvas" approach again but he was a lot more detailed than during day one. He traced his usual charcoal design. He carefuly laid the pigment being quite accurate in his color and shape choices. He didn't leave so much detail for the end as in his first piece. Again, he started with the darkest darks, the fence climbing up the left in this case.
But for me it was all about the edges. One thing I noticed is how cleanly Calvin applies the painting and chisels his edges. He was deliberate and very careful. One would expect a slow process and yet, his painting was done in no time, no messing around, no mistakes. 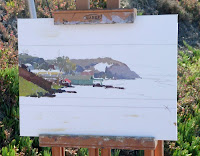 Some quotes from Calvin (in my own words): 1) When you apply a color, do not look at the area you are painting, rather look at any other area. You are constantly comparing and looking for how color compares, not what color it is.
2) It is good to cover the detail in a sort of clockwise move, going from one area to the next and then coming back, it's difficult to make decisions without knowing what's around the corner.
3) Top of the sky is cooler. Bottom is warmer. But we knew this , righ?4) Again, form, color (and color temperature), tone and EDGES.

Here is a slightly more colorful puddle. This is -all_ the color Calvin used in his 1 hr, 30 mins painting which is shown at the bottom. 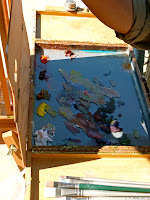 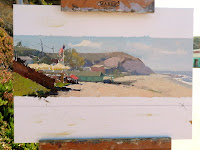 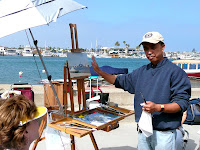 Thanks to the Laguna Plein Air Association, I received a scolarship to take a workshop of my choice. So who happened to be teaching close-by but the master Calvin Liang. I've always admired his rich luscious masterpieces so I took (even more) time from work and took myself to Newport Beach. 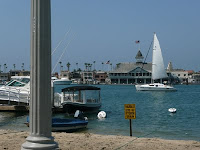 - I will try to synthesize some basic points of his amazing demo.
-For starters, Calvin doesn't use expensive or sophisticated materials for his plein air work. His setup feels comfortable like a pair of old slippers. It's what he is used to. There is a message here, it's not the materials that make the painting. His palette is limited outside, but in the studio he confesses to using a wide palette of up to 23 pigments.I took a picture of his setup and his palette for reference. Nothing fancy. However, Calvin was adamant about one necessary ingredient: "You can't start a painting without a clear design." A concept if you will. It is good practice to have a design in mind before even touching a brush. Then comes the question of form, color, tone and edges. The only things that can go wrong are those four components and any error can be traced to them . "The only trick is no trick" he answered when queried about that deadly question people always ask.... what color is that?. ... A color is the result of the colors around it and there is definitely no recipe. Calvin basically used the same puddle of color for the whole demo hat took aprox. 1 hr an 30 mins. 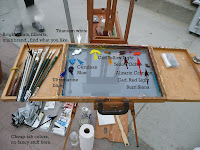 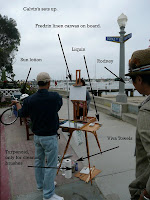 Calvin showed us his color wheels, some fine examples of his design work and examples of his oeuvre in books and magazines. But soon it was canvas time. First he did a soft charcoal design to be certain of where the elements of the design would be. After the drawing, he applied some dark shapes outlining some foreground boats and deep darks. But he had no hesitation moving on to a thick paste for the rest of the canvas. No liquin or turpentine. Lying the shapes thickly as if applying tile. The goal is to cover up the canvas and create unity. 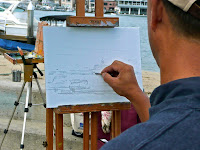 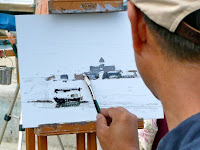 Calvin never looks at "things", just shapes. And he creates the shapes with an incredible lack of detail initially. He believes, and I agree, that the detail practically paints itself once the main shapes are laid out. In this demo, there were two clear phases. An initial phase when he just lays and covers color to achieve unity. The brushwork has bravado and variety. No reviewing or massaging colors around. Barely a paralel brushtroke. 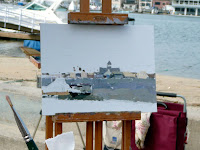 The second phase is methodical and "fun" according to Calvin. One segment at a time, detail is added. But detail is not a reason to look at things "in detail" . Detail now will be kept together by the fact that the whole canvas is thickly covered. Mind you, some of the canvas peeks through in places. 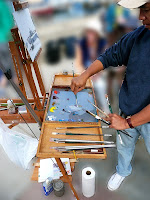 One thing Calvin avoids like the plague is the creation of lines or edges by tracing them with the brush. When he needs to paint an edge, he kisses with paint and "overshoots" the color. Then , with the background color, he picks up the edge and creates a very distinct and clean edge where the one layer of paint overlays another in the right places. 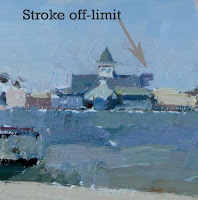 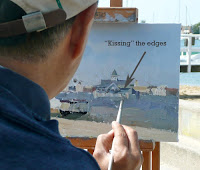 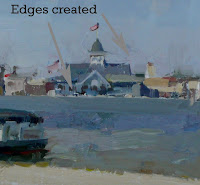 I have to say Calvin is incredibly deliberate and quick because mistakes are few and far between. When he makes one, he mixes back the color, and covers it up to redo the area until he is happy. No matter how many times. It's a "schoolboy" approach that I find attractive since it is common to believe everything we put down is precious. 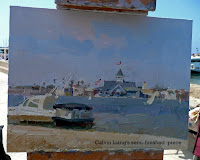